We have been drawing attention to the need to increase parking rates in Ottawa, for a few years, and we might be making progress. Progress is sorely needed.

The cost of metered on-street one- and two-hour parking rates have been frozen in Ottawa since 2008. Meanwhile, the City of Ottawa has increased OC Transpo single-ride transit fares by 80% since 2008.

A single-ride on OC Transpo used to cost $2 in 2008. Fares will increase to $3.60 per ride later this year (once Light Rail Transit launches). 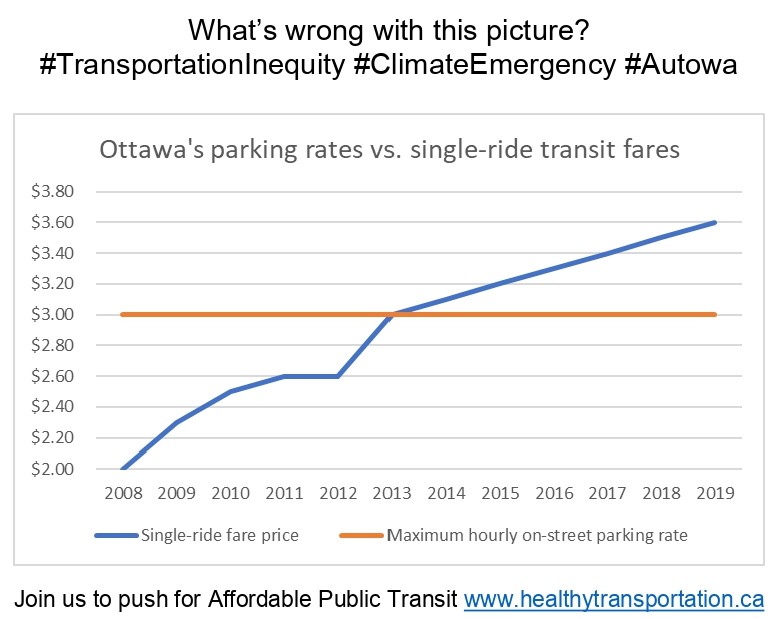 We think this sends the wrong signal. More should be done to encourage people to ride transit, because more people riding public transit will reduce air pollution, and it will help lessen congestion

Due to our work, scrutiny is being placed on frozen on-street parking rates. As noted in the Ottawa Citizen, a report is being written for Council's consideration that may recommend improvements. We hope improvements include ending the apparent tax advantage provided to surface parking lots in the downtown.

On a related note, in the previous term of City Council, we worked with City Councillors so that consideration would be given to easing road congestion. In 2016, this led to a vote at City Council that unfortunately went the wrong way (read On congestion causes and solutions, Ottawa turns its back on reason).

Some Councillors were undeterred, however, and they found money in their office budgets to fund a study on congestion and possible solutions, which was released at an event we hosted in March 2017. The report recommended the best way to reduce congestion in Ottawa would be to increase parking rates.

There is still so much more we need to do to improve the situation, and with your help, we can get there. Please become a member or donate to support our work today.