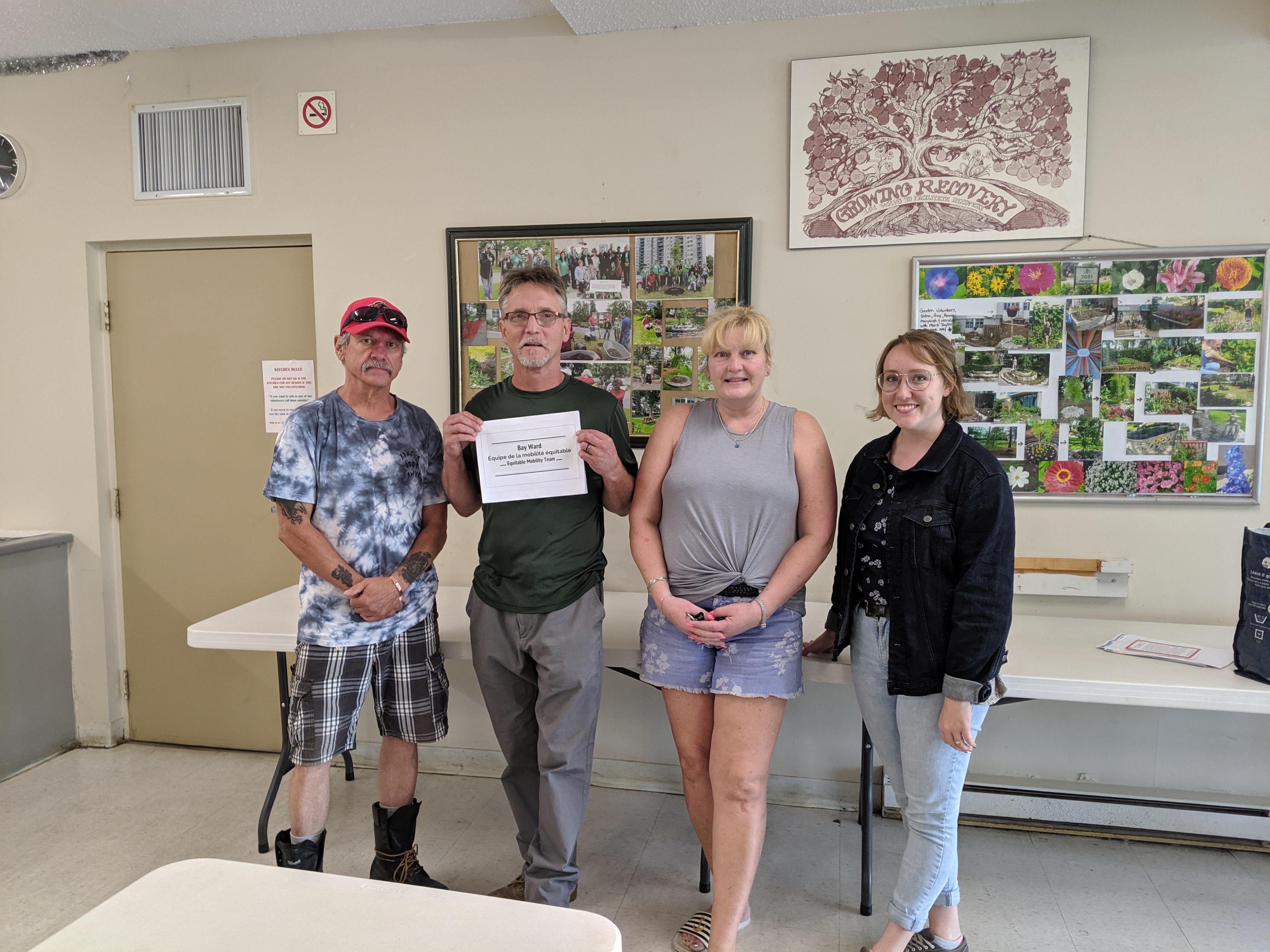 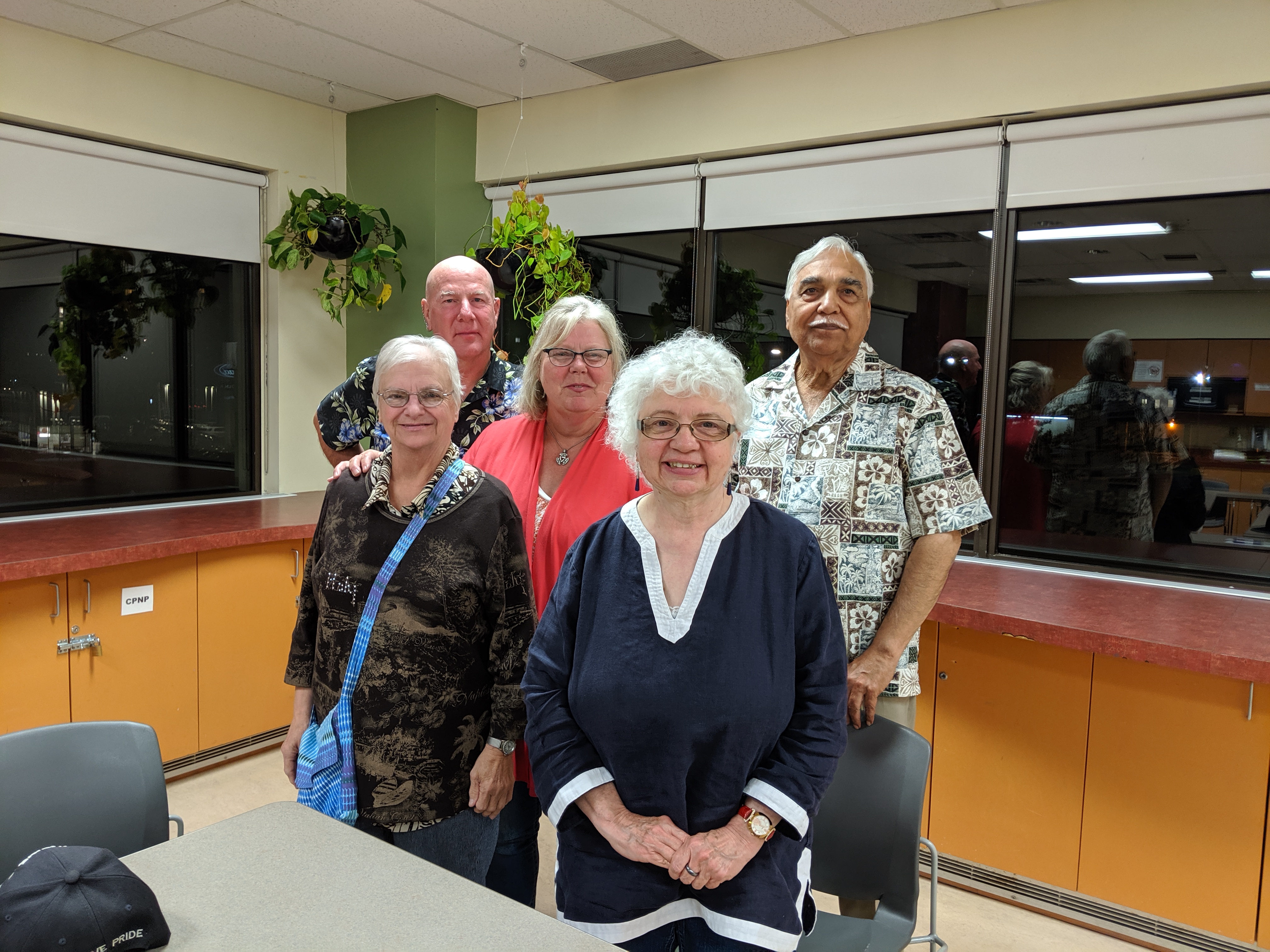 As part of the Trillium Seed Grant, we’ve worked in three neighbourhoods in Ottawa to support residents to form transportation advocacy teams. The Bay Ward team was founded at Regina Towers and has since expanded to the Winthrop Court Community House. Both groups have chosen top priorities to take action on, and have had one joint meeting, to work together on neighbourhood and city-wide issues.

The Bay Ward neighbourhood team, later dubbed the Bay Ward Equitable Mobility Team, began on March 12th with an introduction at a weekly lunch event in the community room at Regina Towers. Here, we were able to have several one-on-one conversations with residents about their experiences getting around the city and learned that several people were interested in continuing the conversation and getting involved.

We arranged to have another meeting on April 12th to have a deeper conversation about the specific transportation issues faced by residents at Regina Towers. Everyone was given the chance to contribute to the long list of issues and we concluded the meeting with a discussion on how we could go about addressing the issues brought forward by the group. The team would later go on to vote on which issues they believe need to be prioritized. This resulted in the following priorities:

The team suggested that a good first step for bringing these issues to the City would be by reaching out to their City Councillor, Theresa Kavanagh, through a Letter Writing Party. They also requested that Councillor Kavanagh be invited to the next meeting so she could receive the letters and provide her input.

On May 28th, residents at Regina Towers wrote letters explaining their personal experiences with the top priorities. Councillor Kavanagh spoke with residents and gave a brief speech on her take of the priorities. She referred to priorities 1, 2, and 4 as high hanging fruit that would require long term strategies and tactics. She referred to priority 3 as a low hanging fruit that she would be able to assist with addressing in the short term. She suggested that the residents reach out to her over email to specify the location and problems of the sidewalks that need repairs.

After hearing from Councillor Kavanagh, residents shared that her attendance and suggestions made them feel optimistic about their goals. The momentum continued at the next meeting on June 25th when residents at Regina Towers decided to focus on a long term, high hanging fruit, and a short term, low hanging fruit. The long term goal is to address the speed of buses as they pull away from stops, and the short term goal is to improve sidewalks in the neighbourhood that cause accessibility barriers. Going forward, the team would aim to draft a letter to OC transpo indicating where and how bus drivers should take special consideration into the needs of their most vulnerable passengers.  They also arranged to take pictures of the sidewalks that need repairs to share with Councillor Kavanagh which took place leading up to the next meeting.

At the most recent meeting, community members from Regina Towers, Winthrop Court Community house, and other HTC volunteers came together to work on the priorities together. Councillor Kavanagh also came to the meeting and provided suggestions for addressing the issues. She proposed a “Wait a Sec” motion be brought to the Transit Commission which would see bus drivers being required to allow passengers who request it to sit down before pulling away from the stops. After the meeting, two of the team members shared their photos of the sidewalks with Councillor Kavanagh, and shortly after repairs were made on Richmond Road and Poulin Avenue to address the accessibility barriers.

Going forward, the neighbourhood team will ensure that the “Wait a Sec” motion is passed and gains traction in the community. They will also reassess their priorities and continue to strive towards a better transportation system in their neighbourhood.