30 km/h streets are safer streets--so why aren't we all getting them?

Toronto and Montreal are among the cities putting widespread 30 km/h speed limits in place to protect their residents. With its street-by-street approach, Ottawa lags behind.

Years ago, I asked for a reduction in the speed limit on a street my daughter takes to school, which has the city's default of 50 km/h. I knew that the Ontario Coroner had recommended lower speeds, and I had seen charts like this one (from Toronto Public Health): 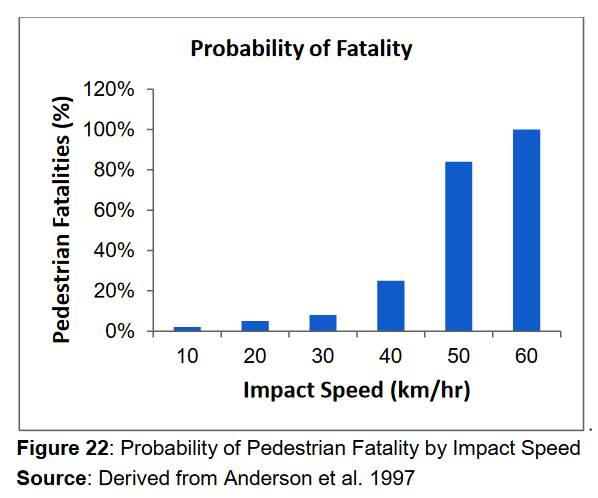 We could change the limit, I was told, but it wouldn't slow anyone down – people will drive the speed they feel comfortable driving. This street had just been rebuilt in a way that made it very comfortable to drive at lethal speeds on a busy route to school. Any request for permanent traffic calming would require a long wait for an expensive study.

I tell this story because I can see the same thinking at the heart of the city's new 30 km/h speed limit policy, adopted last April: lowering the speed limit by itself is a useless gesture, and it is too difficult and expensive to enforce speed limits or physically calm traffic.

Would you like a 30 km/h street in your neighbourhood? First, submit an application. Staff will determine the operating speed – if it's 35 km/h or less, you'll get your 30. If speed is more of a problem, the street must meet a long list of criteria (no more than 2500 vehicles per day, no more than 3 buses per hour per direction, no wider than seven metres, etc.). Slower speeds must be popular on the street, because you'll need a petition showing that 66 percent of residents agree to the change.

(Councillor Jeff Leiper pointed out problems with the policy – “in the areas where we need the most help, this policy is not going to give it to us” – and secured a slight loosening of the restrictions to include more streets fronting schools.)

Other cities are taking much bolder action.

There are 30 km/h zones in more than 80 cities in the European Union; some are city-wide, such as in Graz, Austria, which became Europe's first 30 km/h city in 1992, and Dublin, Ireland, which moved to 30 in 2017. Pressure is building to expand 30 to even more urban areas.

In Toronto, councillors representing more than 700,000 of the city's residents voted in 2015 to drop the speed limit to 30 on 387 km of streets under their jurisdiction. In doing so, they rejected a recommendation from city staff to adopt a restrictive, street-by-street policy.

These councillors took issue with the belief that lowering the speed limit alone was futile. Evidence was brought forward that signs alone will lead to decreases in operating speeds, and that even small reductions in speed would increase safety.

They saw the lower limit as a first step in managing speeds – setting a new standard that would make it easier to meet warrants for speed humps and other traffic calming, and make enforcement tougher with higher fines and points.

They also saw a widespread speed limit reduction as more equitable than a street-by-street approach: “We're going to make it right for everybody. You don't have to give us a petition in order to have a safe street at 30 km/h, as recommended by the Coroner” (Councillor Paula Fletcher).

Councillors felt an urgency to act: “We're not pretending that this is going to solve all ills .... but it's going to contribute, and we have to take every step, based on the evidence that we know to be true, to protect our communities” (Councillor Josh Matlow).

There is no excuse for Ottawa to delay taking similar action. To say we can't because all drivers won't immediately comply is to miss the point: setting lower, safer limits retools the system, so that streets like the one on my daughter's route to school are rebuilt to make slower speeds self-enforcing (with raised crosswalks, more pedestrian crossings, narrower lanes, etc.). It also simplifies traffic calming: no need for an expensive, time-consuming study when you already know the street should be slower – and the money saved can be put into speed humps and other measures.

For now, the trickle of safer streets in Ottawa has begun: the first 30km/h signs are up on Princeton Avenue in the leafy neighbourhood of Westboro, after 90 percent of residents on the street signed a petition supporting the change. Where the next signs pop up is anyone's guess.

Make a Donation
Sign up to Volunteer
Become a Member
Take Action!